Sidney Webber is a Backyard Sports character who has a twin sister named Ashley Webber. Together, they are the famous Webber Twins who confuse their opponents if they are placed on the same team together.

She looks just like her twin sister, Ashley, and until Football 2006, she wore the same outfit as her twin. In Sandlot Sluggers and Rookie Rush, she wears a dark blue jacket with white stripes on the sleeves, a pink shirt, and dark blue pants. In the most recent games, she wears a pink shirt with a white stripe, and green shorts.

Sidney Webber loves to play tennis like her sister Ashley. She has an overprotective father who is very passionate about the sisters playing tennis. For example, Mr. Webber would not want either of the girls to play as a pitcher because it would mess up their "tennis arm." She enjoys playing together with her sister in every sport. Sidney, along with Ashley, comes off as their father's favorite assuming that he spoils them.

Sidney and her twin sister Ashley are quite a dynamic duo on the field, when they are on the same team, that is.

Sidney and her twin sister Ashley love playing together. It really shows, when they are on the same team.

This is Sidney, and no, you're not seeing double. She's Ashley's twin sister. When they're on the same team, it's double trouble for the bad guys.

The other half of the famous Webber twins, Sidney, is a solid pitcher with enough stamina to play a double header. With great vision, she always knows where the ball will go. They say two heads are better than one - pair her with Ashley for the proof.

Wait a minute... is this Sidney or Ashley? Either way, they're both average ball players with a decent handle on the ball. When they're on the same team, though, they can really light it up.

This is Sidney, and no, you're not seeing double. She's Ashley's twin sister. When they're on the same team, it's double trouble for the bad guys.

The other half of the famous Webber twins, Sidney is a smart hitter with exceptional stamina. Her sharp vision makes her hard to strike out and she's even better when paired with her twin sister, Ashley. 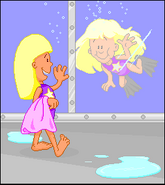 Sidney waving to her sister Ashley in the credits of Backyard Baseball 2003.

Sidney riding a roller coaster in the credits of Backyard Football.