Reese Worthington is a recurring playable character in the Backyard Sports series. He is most known for being asthmatic.

Reese is short with blond hair. He often wears a polo shirt and shorts. Black lines run down his shirt, but it is unclear if they are meant to be suspenders or a part of his shirt.

Reese, in older games, was known for being somewhat of a dork. He played the trombone, swallowed his retainer constantly, was allergic to grass, and had asthma.

In recent games, Reese is known for being a prankster. He got over his allergies and asthma, although he still runs slowly. Dmitri Petrovich (hypocritically) and Kimmy Eckman are known for hating him, just because he's a nerd.

In one of the books, Tricked Out, he is shown to have a competitive side a bit when dealing with a bully named Chuck and when he competed with his friend, Dante.

Reese also sticks up for himself and his friends. Especially when he witnessed Chuck trying to kick Dante out of the skate tournament. Reese was willing to give up his place in the tournament for Dante to skate.

This little guy has a small strike zone so pitchers have a hard time pitching to him. He doesn't like running too much though so you shouldn't put him in the field.

At first glance, Reese looks more like a stamp collector than a baseball player; that's because he IS a stamp collector! Despite that, Reese has surprising athletic ability. Due to chronic 'asthmar' and grass allergies, however, don't expect a lot of innings from him.

Reese is a smart little player. He does hog the ball sometimes, until he gets tired, which happens a lot.

Reese is not what you'd call a "natural athlete". He'd rather be inside, sitting on the couch than outside playing football. Despite this, he's a good player. At least until he gets tired.

Reese would rather be inside playing computer games and eating potato chips than playing football. Still, he's a fine kicker with an accurate leg.

Reese isn't too hot on offense. He's not too hot on defense, either. With his ballhandling skills, however, Reese could make a decent point guard. As long as he doesn't swallow his retainer.

Reese is a top-notch defender whose soccer instincts also make him good at setting up teammates. You'll need to sub him often so he can rest and take his "asthmar" medicine, though. 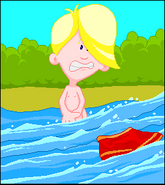 Reese losing his bathing suit as seen in Backyard Baseball 2003.