Pete Wheeler is a recurring playable character in the ''Backyard Sports'' series. He is notable for his physical speed, yet mental slowness.

Pete is shown to have orange hair, and he is relatively tall. In some games, his right eyelid is droopier than the other. His tongue often hangs out of his mouth. In early games, Pete wears a white pullover; from Hockey to Football 2006, he wears a multicolored polo shirt.

Pete is portrayed as being a slow-witted person but incredibly optimistic, however, he is one of the fastest players in the league. In Backyard Football 99 and 2002, he states he is purposely dumb (as his head hurts if he thinks too hard). Though he does state in Backyard Football 2005-2006 that when he was younger his dad used to play ‘upsie daisy’ with him and that he said “whoops” a lot, causing Pete to see a doctor. It could be inferred that Pete was dropped when he was a little kid and that was causing his mental slowness. Football is his favorite sport.

Point Pete in the right direction, and tell him to run. No one will catch him. And his mighty swing is legendary, if he makes contact, that is.

Pete may swing at a lot of bad pitches, but when he makes contact... WHAMMO! This kid can tear it up on the base pads too - just remind him which way to run... and when to say stop... and that the name of the game is 'Baseball' not 'Football'.

Pete isn't the smartest guy in class. In fact, he can barely tie his shoes. Pete's great as long as you keep it simple. Just give ol' Pete the ball and get out of the way!

Pete's not gonna win many spelling bees, but his race-horse fast running might win you a lot of games. Good luck finding him a helmet that fits.

Pete's not going to win a lot of Spelling Bee's, but he'll help your team win a lot of games. He's prone to the 'unforced turnover', but if you need a big body in the paint, Pete's your man.

Pete is what you call a "hustle player." He makes up for his shaky fundamentals by basically outrunning people, chasing down loose balls, and playing stingy defense.

Pete's greatest asset on the ice--or any playing surface, for that matter--is his blinding speed. If you play a dump-and-chase style, then he's just the guy to do the chasing. 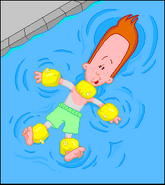 Pete chilling in the water in the credits of Backyard Baseball 2003.

Pete on the restroom line in the credits of Backyard Football.