Pablo Ramón Sanchez is a recurring playable character in the Backyard Sports series. He is often considered to be the best all-around athlete and teammate. He is known for his good sportsmanship and his natural ability to lead.

Pablo has a white shirt with a usually backwards snap-back cap. In its first iteration, it is yellow with a blue brim.

Pablo's hat's color has been changed to purple.

Pablo's appearance changed drastically in the recent game Backyard Sports: Sandlot Sluggers. He wears a cubs hat and grew some hair on his head. Pablo looks more like a Latino kid in the new game.

Pablo's hat is now red, and he has gotten a brown tan. He is featured on the new Backyard Sports website saying, "Cuz we're back!"

Pablo is typically upbeat, confident and positive, but mostly toward himself. He knows how good he is. Examples of which being him saying goodbyes to the ball whilst stepping up to bat, before even swinging the bat, and blaming the bat, instead of taking responsibility for it, when he strikes out. His cockiness goes unnoticed by his teammates, however, due to him speaking Spanish.

In the Sandlot Sluggers and Rookie Rush games, he is the captain of the team called the Big City Bears and plays his home games at the "Sandlot" field.

Pablo has really good all-around stats and because of this he is a fan favorite. He has all the power needed to hit home runs at almost every at bat and has a good arm in football, and has one of the hardest shots in Backyard Hockey. He's also a speedy character making him a pro in more ways than one.

Pablo does not speak any English, it seems. But he knows the language of baseball and knows it well. Simply put, this kid is good.

Quien es mas macho? The secret's out on this superstar! Pablo Sanchez is living proof that size doesn't matter. This pint-sized player can steal bases like Lou Brock, catch balls in his mouth like Willie Mays, and hit homers like Reggie Jackson.

Quien es mas macho? The secret's out on this superstar! Pablo Sanchez is living proof that size doesn't matter. This pint-sized player can steal bases like Lou Brock, catch balls in his mouth like Willie Mays, and hit homers like Reggie Jackson.

You won't hear Pablo saying much other than "nice game", right after his team wins. He is the silent, unbelievable type that somehow knows when, where, and how to do everything. He's great at playing shortstop; Pablo knows the position's importance to the team.

You won't hear Pablo speak much English, but you may see him score a goal or two. He's a good setup man for his teammates, too.

They used to call this kid "The Secret Weapon." Well, we got news for ya: He ain't no secret anymore! This kid is the real deal.

Pablo is a kid with serious skills. He can run, he can pass, he can catch, and his super-low center of gravity makes him tough to tackle.

You can't call him the 'Secret Weapon' anymore. With his blinding speed, deft ballhandling, and deadly outside shooting, Pablo has made a name for himself. Just call him 'The Weapon' now.

Finally, a sport where Pablo has a weakness! Do not, under any circumstances, play Pablo at the center position. Instead, try him at guard, where his dead-eye shooting, slick ballhandling and lightning-fast quickness might be some use to you.

Once again, Pablo's unbeatable combination of speed, coordination and smarts put him at the top of any coach's wish list. Pablo is quite possibly the greatest Backyard athlete of all time.

Quien es mas macho? The secret is out on this pint-sized superstar. Pablo doesn't speak much English, but he knows the language of baseball. Simply put, this kid is really good. 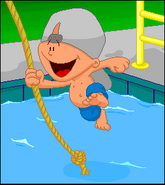 Pablo performing a rope swing routine in the credits for Backyard Baseball 2003. 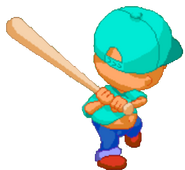