Maria Luna was the Backyard Sports character who loves pink.

Maria is a Hispanic girl who has long, blue-textured black hair in pigtails, pink ribbons in her hair, and tan skin. She wears a frilly pink dress that her mother made for her, and white sneakers.

Maria wears a pink jumper and a white shirt.

She is shown with long, dark brown hair in braided pigtails and dark, tan skin. She wears a blue and pink western style shirt, tan pants and sneakers.

Maria Luna is a happy-go lucky Mexican-American girl who used to love wearing pink dresses and ponies. Her family owns an Mexican restaurant which she encourages people to come over. She has a collection of "Precious Ponies" in her room. In the older games, she prefers playing on a team with pink uniforms and does better on them. However, she toned down on her love for pink in the newer games. She got her own pony.

What Maria lacks in baseball smarts, she makes up for in enthusiasm. And in case you didn't know, Maria's favorite color is pink.

Maria is great at fielding the ball. Just don't ask her to throw it back, unless you like chasing wild throws. She has good vision at the plate, respectable power, and a pretty new dress that she can't get dirty. So how exactly do you solve a problem like Maria? Give her a pink uniform, that's how.

Maria could be a good player if she wasn't so concerned about her pink dress. If you ask her, she'll tell you a lot about ponies.

In addition to having one the largest "My Precious Pony" collections in the Northern Hemisphere, Maria has a talent for catching the ball. She also likes pretty pink helmets.

The good news about Maria is that she's a fantastic wide receiver. The bad news is she insists the team's uniforms be pink.

Don't let that pink dress fool you. With one of the better jump shots in the league, this girl is a silent assassin from long range. Her short stature limits her on defense, however.

Maria riding on a carousel in the credits for Backyard Football. 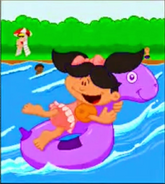 Maria in a swimsuit as seen in Backyard Baseball 2003.