Regina Williams (2002)
Kiesha Phillips is a heavy set, dark-skinned girl. She is by far the most athletic girl in the series, and excels in almost every sport. It is hard to tell her nationality, because she has a Spanish accent in some games, and a black-American one in others. Kiesha is known for her very short bat in Backyard Baseball, although she has a lot of power.

Kiesha appears as one of the heavier set characters in the series, and this helps her power in Backyard Baseball, which is consistently great. In earlier games, she wears a yellow T-shirt; starting in Hockey, she wears a football jersey that has "99" on it that changes colors depending on her team.

A masculine little girl, Kiesha brags about how she has a lot of power in Baseball and how she has a lot of great skills. She also watches a lot of TV; she references classic TV shows in her field chatter. In Football 2004, she says she has seen every episode of Sanford and Son and Gilligan's Island.

Keisha is the neighborhood clown, but she takes her baseball pretty serious. Her speed and coordination make her a logical choice for the outfield.

One of the best outfielders in the league, Kiesha hits the ball hard and has a strong arm. And when she gets those legs pumping, this girl can speed around the bases. You can't go wrong with this kid on your team.

Kiesha likes to play the role of the team clown. She plays a pretty solid, if not spectacular brand of soccer, too.

Kiesha was made for football. She's big, strong, and fast. She's also a positive influence in the club house, keeping her teammates loose with a joke or dead-on impression of the coach.

Keisha was born for football. She can run, she can block, and she can tackle. She's also the all-time league leader in knock-knock jokes.

Able to control the game on both offense and defense, Kiesha is the most dominant post player in the league. She doesn't have much range, but when you own the paint like she does, who cares?!

In the paint, Kiesha is your basic unstoppable force of nature. On offense, she uses her quickness and inside touch to score at will. On defense, she blocks shots and dominates the boards. It's only a matter of time before she goes pro. Like, maybe after 6th grade.

Kiesha's slapshot is almost as accurate as her impressions of the school principal. Like a lot of her jokes, though, she's strictly a one-liner--only play her on offensive lines! 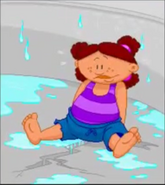 Kiesha at the bottom of an empty pool in the credits of Backyard Baseball 2003.