November 20, but it was changed to November 2 in Backyard Hockey

Kenny Kawaguchi, the cool kid of the group, is a character in the Backyard Sports series. He is the only character with a wheelchair.

Kenny is shown to have a red shirt and blue baseball cap. His wheelchair is blue.

Kenny looks fairly different in newer Backyard games. His cap has been removed and he is shown to have black hair. His shirt has been changed to orange, and his wheelchair looks different.

Kenny is one of the cooler kids in the league, with dreams of becoming a DJ. In Backyard Football '99, he states he once used one of his mom's records to pretend to use turntables, and later broke it. He goes fast because of his wheelchair. Kenny never lets it be his weakness when playing sports with the other kids. Although, he says it's difficult to shoot basketball or run due to being confined to a wheelchair; he still thinks he is a normal kid despite most people feeling sorry for him. Kenny also showed an interest with robots and stated many times that he will build his wheelchair into a giant robot. Vicki even said (in Backyard Basketball) he will build a ballet robot for her if she was nice to him.

Don't let the wheelchair fool you, Kenny is a fantastic ball player. He is a sure-handed outfielder and a speedy base wheeler.

One of the smarter players in the league, Kenny is a solid hitter with a good eye for the ball. Incredibly, Kenny seems to get stronger as the game goes on, and can play for hours... or days! He's pretty fast on the base path too. A good utility player.

One of the smarter players in the league, Kenny is a solid hitter with a good eye for the ball. Incredibly, Kenny seems to get stronger as the game goes on, and can play for hours... or days! He's pretty fast on the base path too. A good utility player.

Kicking from a wheelchair might seem tough, but Kenny has it mastered. What he lacks in power, he more than makes up for in accuracy.

Kenny's a very smart kid who understands the game. He's also a great blocker. Just remember: it's two-hand touch with him.

The K-Man is a great blocker and a clutch receiver when given the chance. Before games, Kenny likes to 'chill out to old-school hip hop.'

K-man doesn't get a lot of vertical, but when you can shoot the ball like he does, who cares? Not the best defender, but his deadly range from downtown can give your team some instant offense.

Kenny is a veritable tank on the ice. He may be slow-moving, but he's invulnerable to poke checks and has a cannon for a shot. He's also pretty tough as a goalie. 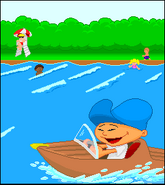 Kenny driving a motorboat; which is seen in Backyard Baseball 2003.