March 3, but was changed to March 9 in Backyard Hockey

Dante is a short African-American boy with an Afro. Originally, Dante wore a yellow shirt and orange pants.

He wears a white shirt, a tan vest, and a backwards blue visor.

He wears a purple shirt with a slice of pizza on it, and green shorts.

In the games, Dante is shown as always eating and thinking about food all the time.

In books such as Tricked Out, his personality is expanded to beyond just food. Dante is shown to be a talented skateboarder along with his friend, Reese. He does shows less confident in his abilities until Reese encourages him to sign up for the skate tournament.

Dante can be shown to have a slow temper compared to his friend, Reese. He was patient to helping Reese practice for the tournament until Reese started to annoy him with his competitive obsession. Despite their fight, he still cares for Reese and values their friendship.

Dante's overall skill makes him a great choice for any position. All he asks in return is an endless supply of candy and hamburgers.

Dante Robinson is an eating machine. When he's not stuffing his face, he's one of the best all-around players in the league. With his blazing speed and incredibly accurate throws, Dante's got the skills to pay the bills - the grocery bills, that is.

Dante could eat all day long. If you give him enough orange slices, he'll play all day long, and pretty well, in fact.

Dante's not a big kid, but he eats like one. He also plays like one. Put the ball in his hands, and he'll chew up big yardage for your team.

Dante is an eating machine. With blinding speed and a cannon for an arm, Dante can also eat up some serious yardage for his team.

Dante 'Stretch' Robinson is proof that you don't have to be tall to be a great basketball player. One of the quickest players in sneakers, Dante is as good as any point guard in the league.

Dante may be a little guy, but he can skate circles around most bigger kids. He likes hockey because there's two big breaks for him to run to the concession stand between periods.

Dante Robinson is an eating machine. When he's not stuffing his face, he's one of the best all-around players in the league. With his blazing speed and incredibly accurate throws, Dante's got the skills to pay the bills - the grocery bills, that is. 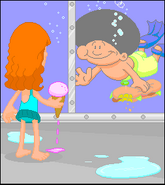 Dante swimming and looking at a girl's ice cream cone in the credits of Backyard Baseball 2003.