Backyard Soccer is a sports game developed by Humongous Entertainment and published by Infogrames for the Windows and Macintosh operating systems in 1998. It is the second game in the Backyard Sports series and the first in the Soccer series. In 2001, the game was ported to the PlayStation by Runecraft, Ltd.

There are two primary modes to play through: single game, and league play.

For a single game, the player can go to the pick-up window, and select one of eight fields. The player and a computer "player" each select eight characters, and the two teams play a scrimmage at a select difficulty.

In league play, the player alone picks eight players, and enters a team into the "B division". The top two teams in the B Division move to the higher "A division" at the end of the season, and the top A division teams join the "Premier Division." To beat the game the player's team must advance to the Premier Division and place first. The winner of the Premier Division advances to the Astonishingly Shiny Cup of All Cups Tournament, facing 15 other teams from around the world. Winning this tournament beats the game and unlocks the pizza party. 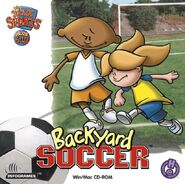 Front of the jewel case 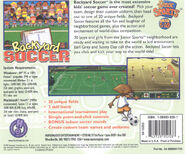 Back of the jewel case 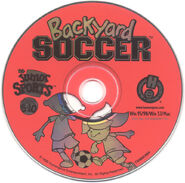 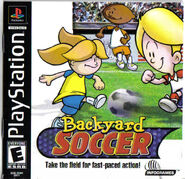 Taken from the Humongous Entertainment Wiki