View source
watch 01:36
We're Getting Mutants in the MCU - The Loop
Do you like this video?
Play Sound

Annie appears as a Caucasian, blonde, short-haired girl. She wears a white shirt that has a rainbow on it. She wears sandals rather than sneakers.

Beginning in Hockey, Annie wears a green bandanna and a white t-shirt over a green long sleeve shirt.

Annie is a hippie who loves to be out in the environment. She is concerned about helping it out, almost to a fault: she once tried to stop bathing to conserve water, and she thinks leather comes from trees. She is one of the least aggressive players in the league. According to Vinnie The Gooch, she is not very competitive due to her peaceful personality. She is extremely pacifistic to the point where she has a problem with hitting "poor, defenseless" baseballs with her bat. She is very outgoing and has a positive attitude. She once attempted to befriend the introverted Lisa Crocket, believing that Lisa is "complex and deep." Her favorite baseball position is catcher. In Backyard Baseball 2005, she has her own field called Frazier Field.

Annie's a well rounded player. She's not too keen on running so she likes playing catcher. She also likes animals and ice cream.

Frazier's a solid hitter with some pop in her bat. Also, she's a pretty speedy runner, even in those natural fiber sandals she always wears. One big drawback: she tires out pretty quickly. Not enough protein in her diet, perhaps.

Annie's not too keen on running, but she sure likes kicking. She thinks that grilled cheese sandwiches aren't that bad, either.

You might think Annie's easy-going personality would make her a bad football player, but that's not true - she's a solid performer. She'd make a good all-purpose sub.

Annie's a kicker. Plain and simple. Don't let her play any other position, or she might hurt herself or others!

Annie Frazier may be a little too mellow to be an all-star, but don't let her calm demeanor catch you off guard. While she won't win many footraces, she can post it up with the best of them.

When she's not tuckered out from all the skating and non-stop action, Annie can be an okay hockey player in short bursts. Very short bursts. 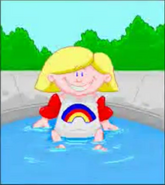 Annie sitting in a wading pool in the credits of Backyard Baseball 2003.

Annie hugging a goat in the credits of Backyard Football. 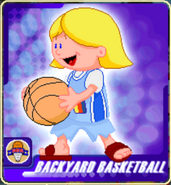