Amir Khan, the drummer of the group, is a character in the Backyard Sports series. He likes to play the heavy metal drums and is the younger brother of Achmed Khan.

Amir very much resembles his brother, only he is shorter, has no headphones, and has an orange shirt.

He mostly keeps his appearance from the past, only his shirt has been changed to dark red and he has a slightly different haircut.

Amir looks up to his big brother and dreams of playing drums in Achmed's band (however, in Backyard Soccer, he said he wanted to play bass).

In Backyard Baseball 2003, he said he once made a poster for a contest at school about not littering with a rock band singing a song about littering. It did not win, though.

Amir likes music and root beer. He also likes playing in the outfield. Just make sure his older brother Achmed is on the same team.

He's not quite the hitter that his big brother Achmed is, but Amir appears to have better instincts for the game. Put him on the same team as his brother, and he always seems to step it up a level. Amir is great on the mound too, especially in a closing role.

Alone, Amir is a pretty decent player. Put him on a team with his brother Achmed, and he's a little powder keg.

Amir's a smart kid. He's got a great eye for the ball and a pretty respectable kicking leg. He likes to play with his big brother Achmed.

Amir can rock almost as hard as big brother Achmed. He's got a great eye for the ball and a pretty respectable kicking leg. Rock on, Amir!

The biggest difference between heavy rocking Amir and heavy rocking brother Achmed? Amir can play defense. With his phenomenal speed and court skills, Amir might be the top point guard in this league.

Amir goes by "Sticks" because he wants to be a rock-and-roll drummer, but it's his stickhandling on the ice that really rocks. Try playing him on the same line as his brother, Achmed. 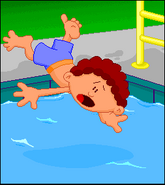 Amir falling into the water in the credits of Backyard Baseball 2003.