Mark Lund (1997-2002)
Ryan Drummond (2002-2003)
David Holt (Junior Sports Basketball)
Achmed Khan, the rocker of the group, is a character in the Backyard Sports series. He loves rocking out on the heavy-metal guitar. He was absent in Sandlot Sluggers and Rookie Rush games, but made his return in Backyard Baseball 2015.

Achmed has tanned skin with dark-brown hair, a yellow shirt, and red headphones.

In the later games (such as Backyard Hockey), Achmed's appearance remains very much the same, only his headphones have been changed to more modern ones. His last recent design change consisted with his headphones removed and his hair seems more spiked than curly.

In the mobile games, his headphones have returned as his hair is less spiky than his Atari design.

Achmed loves heavy-metal music, and wants to be a rocker in the future. In Backyard Baseball '03 and Soccer '04, Achmed said he wrote a song called "Heavy Rocking Guitar Man".

He then states that there is a 40-minute guitar solo after that he is still working on.

In more recent games up until he was dropped from the game, he seems to have mellowed out a little but still chases his dream of being a rocker.

However, with the reboot of the franchise, his rocker personality has returned and he went back to wearing the headphones.

When Achmed isn't rocking out with his headphones on, he's a pretty solid player. Definitely a power hitter. He has a younger brother named Amir.

When he's not busy playing the Heavy Rocking Guitar, Achmed's hitting the ball out of the park. His Zig Zag pitch is the best in the league - maybe it's from all that head bangin'. You might have to remind him to stop rocking out and play ball, though.

This kid really likes to rock. Achmed is also a pretty solid player. His skill in goal is better than average. Watch for his younger brother, Amir.

Achmed likes to rock hard on the air guitar. He's also been known to rock receivers with his hard hits. He has a younger brother, Amir.

When Achmed's not rocking out on the heavy rocking guitar, he's rocking receivers with his hard hits. Keep on rocking, Achmed!

When Achmed isn't playing the heavy rocking guitar, he's out on the court, lighting it up from downtown. If he ever learns how to play defense, he could be a star in this league.

Achmed knows how to rock the rink with air guitar licks and a wicked hockey stick. He can fill in on just about any line, or even as a goalie in a pinch. Rock on, Axeman!

When he's not busy playing 'heavy rocking guitar', Achmed's hitting the ball out of the park. You might have to remind him to stop rocking out and play ball, though. 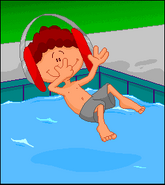 Achmed jumping in the pool for a splash as seen in Backyard Baseball 2003.